Virtalis HIVE with IS-900 installed at UWC 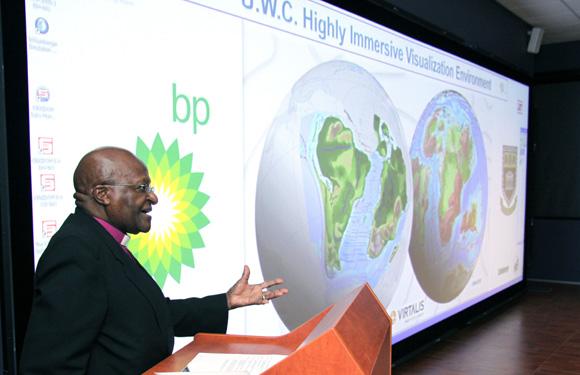 Archbishop Emeritus Desmond Tutu was captivated by the Highly Immersive Visualisation Environment (HIVE) designed and installed by Virtalis when he officially opened the facility at the University of Western Cape (UWC) last week. “The Arch”, as he is known in South Africa, was performing one of his last engagements as the University’s Chancellor prior to his retirement.

He was joined by Virtalis MD, David Cockburn-Price and Virtalis technical director, Andrew Connell, who formed part of a host of VIPs for the high profile ceremony at the new HIVE, which is located within the Department of Applied Geology.

Archbishop Emeritus Tutu attended the formal presentation and saw how the HIVE will operate, but he also let out a whoop and his trademark giggle when the Virtalis team sent a virtual wasp to buzz near his head. He said, “This is an amazing, amazing contraption.” David Cockburn-Price commented: “The Archbishop is a vital bundle of energy. It was a privilege to meet him and observe his enthusiasm at close hand.”

Andrew Connell took guests at the opening on a Virtual Reality (VR) journey across Africa using Virtalis’ GeoVisionary software. He also demonstrated the power of tracked, immersive VR, but then lightened the mood with some fun, 3D, short films. Prof. Paul Carey, who holds the Chair of Petroleum Geology at UWC and is also the director of the BP HIVE, explained:

“We believe we now have the most advanced VR system in South Africa. It allows us to take the real world and bring it into this room, making it interactive and almost touchable. People can benefit from virtual experiences because it is possible to explore, design and train virtually and bring that virtual knowledge to bear in real life.”

At the core of the HIVE is a Virtalis ActiveWall system which is being used to visualise data from a wide range of industry-standard software packages. The HIVE at UWC was financed by a matched funding arrangement between the University and BP. Richie Griffiths, the manager of the BP HIVE, commented: “Students using the HIVE initially will be reading for MScs and PhDs in the South African Petroleum Studies Program and MScs in Applied Geology, but this user body will expand as relationships with other disciplines grow.”